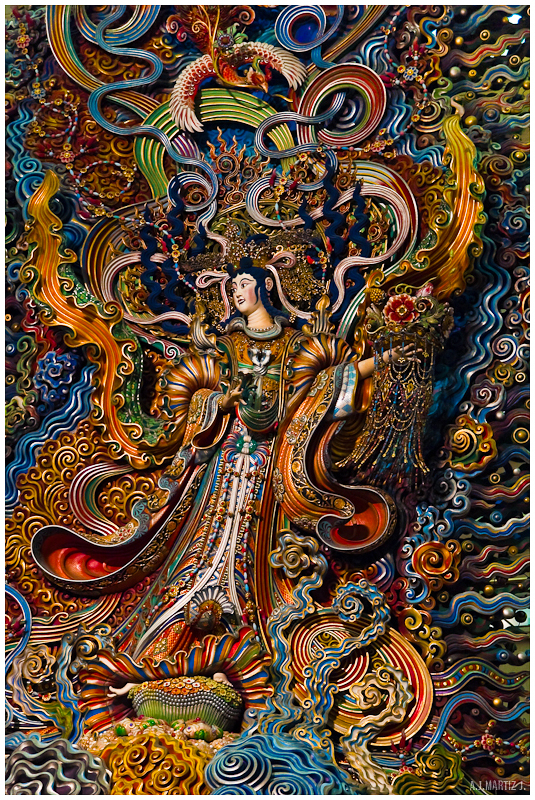 This photo was shot two years ago inside the Mitsukoshi store located in Nihonbashi.

The statue of goddess 'Magokoro' is a masterpiece of Mr. Gengen Sato who spent more than 10 years at the task after it was commissioned by Mitsukoshi Ltd.
Consisting principally of Japanese cypress 'Hinoki" about 500 years old that was selected from the woods surrounding the Kibune Shrine in Kyoto, the statue is painted with clay pigment and chemical coloring, and decorated with gold and platinum. The figure represents the cloud-swathed Goddess of Sincerity descending lightly to the fruitful earth, accompanied by a phoenix bearing an offering for her tray of heavenly flowers.
Height of statue exclusive of base: 10.91m (35.8 feet)
Height of figure: 2.74m (9 feet)
Width of statue: 4.39m (14.4 feet)

Reference: Description of a photo on the Flickr gallery of user edgarjlaw. The original source is from the back of a photo distributed to the visitors by Mitsukoshi.

Fascinating and quite beautiful. Thanks for the background. Very nice work!

Outstanding labor of love. This must contain every color the human eye can see and a few the eye can't. Very nicely captured as well.

@Ralph Jones: Thank you very much Ralph, I tried to do my best in capturing such a detailed and colorful work of art, but I still feel that a photo is not enough!

soo beautiful photo... it's an insipational picture for me..

@fernie: Thank you Fernie, I am glad to know it has inspired you!

Wow, that is so beautiful. I bet it is even better in person. The detail is fabulous (both your photo and the statue).

@Christine Walsh: It is much better in person, very impressive work. Thank you!

A beautifully detailed and colourful capture.

This photo is perfect, the focus and colors are superb. What luck you saw this great work and got to share it. Thanks for the explanation.

A fabulous piece of art which you have captured so well to do it full justice. Such a massive collection of colours and textures and you have caught the lot.

@Curly: You should see it in person, it is absolutely fantastic. What I photographed is just a portion of a huge wooden piece of art. Thank you for your kind comment!