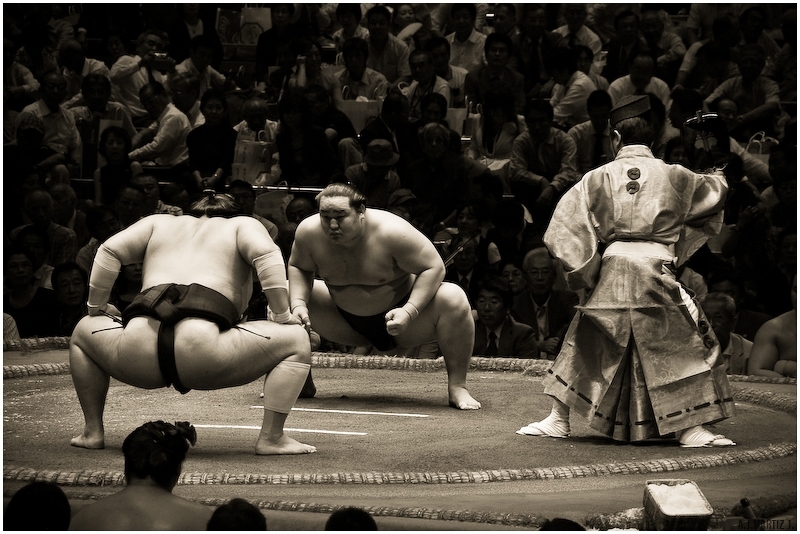 Asashoryu Akinori (the wrestler whose face can be seen in this photo), born as Dolgorsuren Dagvadorj on September 27, 1980 in Ulaanbaatar, Mongolia, is the first sumo wrestler from Mongolia to reach the rank of yokozuna, the highest sumo rank. He is considered one of the greatest sumo wrestlers in history. Source: Wikipedia

I should have explained about sumo first instead of introducing a particular sumo wrestler, I am fan of Asashoryu and today when I was reading the newspaper I read an article about him being suspended for the next two grand tournaments, following is an excerpt of that article:
'The Japan Sumo Association took the surprising measure Wednesday of suspending Mongolian grand champion Asashoryu from the next two grand sumo tournaments as punishment for playing in a soccer charity event in his home country after opting to sit out the summer regional tour citing injuries.
It is the first time in the history of the sport that a yokozuna has been suspended or received a salary cut.'
Source: The Japan Times
I don't know what to say about that more than wish him good luck with that situation.

Great job with the processing. Love the shot.

wow nice - I have not seen too may sumo photos before. Good action pose.

@Daniel: Thank you very much Daniel!

What a fantastic close-up! Love it in B&W!

great capture.. one of the only sumo shots i've seen. great tones

@Nick Passantino: Thank you very much Nick, I will try to post more photos of Sumo later, I will let you know! =)

Great shot! I'm waiting for your next photos of Sumo! :D

@Oddiy: Thank you very much Oddiy, I will do my best for making a good series about Sumo, it will come later, I will let you know when it is ready =)!

Your composition is absolutely stunning!

@Rags: Thank you very much Rags!

What a shot!!!! Fantastic composition, you can feel the atmosphere. The tone is splendid. And shame on the Sumo Association! To punish him for an act of Kindness is really low.

@Lorraine: Thank you very much Lorraine, its a complicated situation I assume, lets hope for the best, =)

Great story, great shot, love the pp-ing!! And it makes you wonder how the other team felt when they saw this guy appear on the field to play soccer?!! charity event or not... I'm not sure I'd like to be on the opposing team LOL

hey this is great capture ... the tone is perfect beautifull work

@stijn: Thank you very much Stijn!

@Nigel: Thank you very much Nigel!

Wow, I've never seen anything like this before! This is a beatiful shot... the lighting, the tones, and the composition are all great.

@Jenya: Thank you very much Jenya!

jajaja! What a wonderful pic! It has really made me laugh... the "pose" is great and sooo funny!

@paperdoll: Thank you very much Paperdoll, it is the pose of the sumo wrestlers before starting the combat!

Ooo, I love it. I also love watching sumo wrestling in general - but don't look too closely into that world - it's the entertainment business.

@Damon Schreiber: Thank you very much Damon, I will be careful, =)